Political Fog in the Basin? 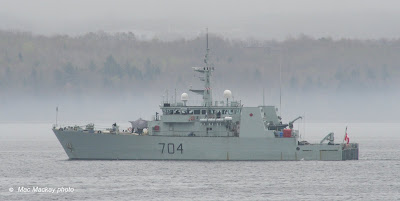 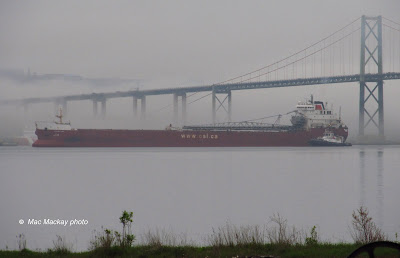 
It was "black tick o' fog" in most of the harbour today, but the fog did come and go from Bedford Basin, to reveal some shipping activity. There is a very interesting political coincidence going on with the two ships.
HMCS Shawinigan MMA 704 was doing some exercising with her summer crew (these ships are used intensively for reserves training.) Named for the hometown of a former prime minister, the ship was launched by Halifax Shipyard on November 15, 1996. The ship's sponsor was Mme Aline Chrétien, wife of that prime minister, Hon. Jean Chrétien.
In the early evening Atlantic Erie arrived to load gypsum. The ship was built at Collingwood Shipyard and launched as Hon. Paul Martin on November 1, 1984. Sponsor was Mrs. Eleanor Martin, wife of Senator Paul Martin, and mother of later prime minister Hon. Paul Martin Jr., owner of Canada Steamship Lines. The ship was renamed in December 1988 and it was flagged out to the Bahamas in January 1989. It returned to Canadian flag in 1996, but has kept the name Atlantic Erie ever since. Mr. Martin Jr. succeeded M. Chrétien and was the last Liberal Prime Minister of Canada.
Posted by Mac at 9:38 PM