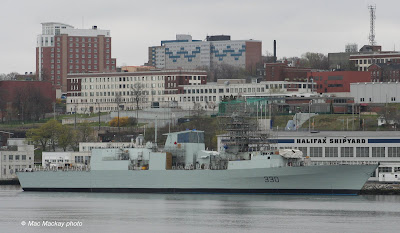 HMCS Halifax was hauled out of the graving dock at Halifax Shipyard early this morning. The dock is needed for other activity involving the barge Atlantic Sealion and tug Atlantic Fir (we think.)
However the tug and barge overshot the dock and went round to the inside of Novadock before returning to the IEL dock - we'll wait and see what happens.

The Halifax graving dock was built in 1889 and is essentially unchanged. It was heavily damaged by the Halifax explosion in 1917, and its original dock gate has been replaced, but otherwise it is remarkably intact. All around it has changed however!

See these (and several other) fascinating photos from the Nova Scotia Archives: