Big one in, big one out

The crude tanker Genmar St.Nikolas put in its first appearance in Halifax this afternoon. At 149,876 deadweight tonnes (79,235 gross) it is a more or less typical size for Halifax crude carriers. It flies the flag of the Marshal Islands and was built in 2008. Atlantic Fir is stern escort, and the tugs Atlantic Oak and Atlantic Willow are on the ship's starboard side assisting in her turn. 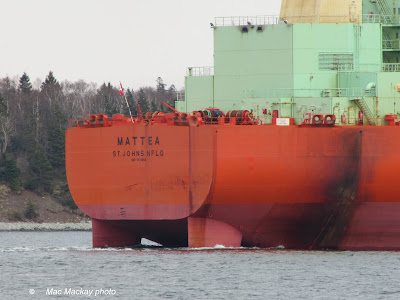 3. Something spilled but left a nasty stain. The twin skegs and rudders are clearly visible in this view.

The long time it took to bring Genmar St.Nikolas alongside delayed the departure of the Canadian shuttle tanker Mattea by an hour and a half until two tugs became available. Mattea measures 126,360 deadweight tonnes (76, 216 gross) but is a slightly different animal, in that it has twin screws for maneuvering, and an elaborate bow loading apparatus for use at the offshore oil installations. It also has the enclosed bridge wings of a ship that works in northern waters. It sailed for Hibernia, and displayed some nasty smudges on the starboard quarter. These were the possible subject of the visit to Halifax. Several waste oil trucks were seen at the ship since it arrived Friday.