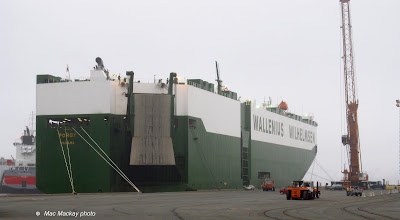 1. The fog moves in as Porgy ties up at pier 30. The ramp is just about to come down to unload.

From the opera Porgy and Bess, a song made famous by Ella Fitzgerald and Louis Armstrong, is entitled " Dere's a boat dat's leaving soon for New York."
In this case it's the Wallenius-Wilhelmsen Pure Car and Truck Carrier (PCTC) Porgy. Flying the flag of Panama and operated by Excel Marine Co Ltd of Japan, the 58,752 gross ton ship has a capacity of 6,284 cars. It is an identical "sister" to the Bess, posted here on April 25. Porgy was built in 2009 and Bess in 2010.
The ship unloaded European cars at Autoport during the day, then moved over to pier 30 -31 this evening to unload some non-car traffic. This will likely be construction cranes and other oversize material. The ship's 150 tonne capacity stern ramp and 4 hoistable car decks (which can be re-aligned to suit large objects) will be easy work for this ship.
The ship was due to sail within an hour of securing - for New York of course!
Posted by Mac at 10:18 PM