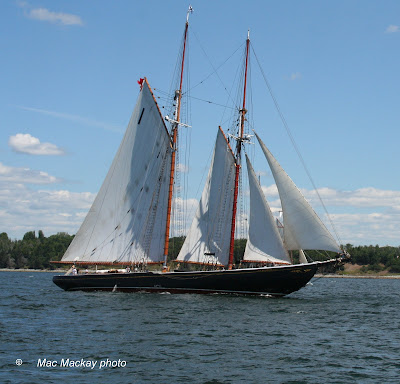 The latest iteration of the schooner Bluenose took to the water today in Lunenburg. After a two year construction period, the essentially new vessel, is expected to resume the role of its illustrious predecessors as the icon of Nova Scotia.
If you have watched the construction on the web through the excellent web cams on site you will have noticed that this is a keel up new construction.
For political reasons (I guess) the boat is named Bluenose II, even though precious little of the previous Bluenose II remains. The spars from the previous BII will be re-stepped and some other equipment will be re-fitted into the new boat.

If I were to write the boat's name now I would call it Bluenose II (ii) since it is a new vessel. It could not be named Bluenose III since that name is already taken, the Province of Nova Scotia was in a quandry as to a name, so they took the only route open to them and re-used the name. However they muddied the waters from day one by insisting that it is a reconstruction. I have never seen or heard of a reconstruction that is so extensive, so why they could not admit that it is a new Bluenose II I will never understand. Perhaps that is why I will never be a politician.
In any event it is a beautiful boat, and well built, and it will be a credit to all.
Posted by Mac at 8:43 AM