The small US flag cruise ship Yorktown arrived today for bunkers. The ship has spent a good part of the summer on the Great Lakes and St.Lawrence River, visiting ports that would not otherwise see cruise ships.
Built in 1988, it measures 2,354 gross tons and is rated for 138 passengers.
Its original name was Yorktown Clipper, becoming Spirit of Yorktown in 2001 and taking its present name earlier this year.
If the ship looks familiar it is because of its smaller near sister that used to call in Halifax. Nantucket Clipper it was built in 1984 and was rated for 102 passengers. It was slightly smaller at 52.6m loa vs. 68.3m  for Yorktown, but otherwise of essentially the same design. It was renamed Spirit of Nantucket in 2006.
It struck a submerged barge in the Intracoastal Waterway in November 2007 and came close to sinking. It was repaired and sold for further use in Alaska and started the 2008 season there as Spirit of Glacier Bay, the name it still carries. 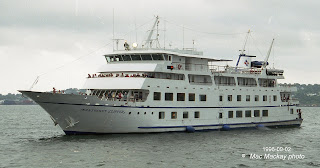 2. Nantucket Clipper in its original all white colour scheme in 1996.