The siesmic research ship Geo Caribbean arrived in Halifax today to get out of the path of Tropical Storm ex Hurricane Leslie, which is sweeping toward Newfoundland.
The Norwegian ship had been working on a 2-D seismic survey on the Flemish Pass. Because the area is within Canadian waters, it had been granted a coasting license for the period May 15 to October 15. It also had the supply vessel Thor Omega running fuel and provisions out to the ship from time to time. 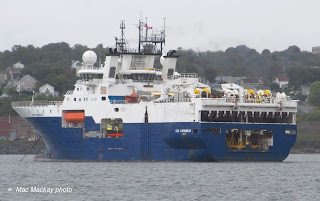 The stern of the ship is where the action is. It trails seismic streamers from a series of winches and take up reels. The 12,108 gross tons ships was built in 2008.
Tuesday Sept 11 Update: 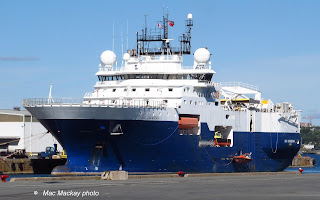 The ship's foredeck is also a helicopter landing platform. It carries an array of water craft including an enclosed lifeboat, a work boat and an inflatible, which had been working around the bow. Note also the open platform near the bow. This is a docking platform similar to those found on cruise ships. It used by crew to heave mooring lines and to provide a view of the ship below the curvature of the bow while docking.
Posted by Mac at 8:18 PM