The first Super Greenship and the first "Cross-Bow" ship to call in Halifax arrived today: 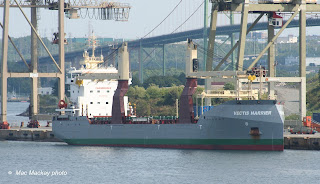 1. Alongside at Fairview Cove, the distinctive fine bow is evident.

2. Entering the Narrows from Bedford Basin, outbound. A travelling gantry, stowed forward, is used to lift off the hatches.

Carisbrooke Shipping  of Cowes, Isle of Wight, UK, is building a fleet of super efficient ships. The first series are called the Super Greenship 8500 class. Based on a design by the Dutch firm of Groot Ship Design, the 8500 tonne deadweight multi-purpose ships feature the distinctive "Cross Bow" * form. Intended to reduce pitching and slamming at sea, the bow also claims to produce greater efficiency of operation when combined with a new propellor design and other features. The ship is also rated as Finnish Ice Class 1 A.
Built by Jiangsu Yangzijiang Shipbuilding Co Ltd in China and delivered earlier this year, Vectis Harrier tied up at Fairview Cove this morning and sailed at noon. While there it took on bunkers from Algoma Dartmouth but did not seem to work any cargo.
Aside from the bow, the ship looks like most small general cargo/bulk/container ships of 6190 gross tons, 8557 tonnes deadweight. It is fitted with two 80 tonne cranes and has a single box shaped hold, with lift off hatch covers.
The ship seems to be a throw back to olden years when knife-like ship's bows were all the rage. Their effectiveness in slicing open other ships in collisions (the Empress of Ireland being a prime example-it was sliced open by the collier Storstad) lead to the development of the "soft bow" which gave way in collisions, and tended to protect the forward collision bulkhead also.
[* a similar looking bow form called the "Axe Bow" has been developed by Damen Shipbuilding and similar versions are widely used in new offshore support vessels.]
Footnote:
Vectis Harrier is a fairly tame energy saver compared to the ship I saw on the St.Lawrence in August. E-Ship 1 is wind assisted. There are no sails however. The ship is fitted with four rotating cylinders which assist the ship to varying degrees, depending on wind speed and speed through the water. When I saw it on August 21 it was not getting much help from the wind. 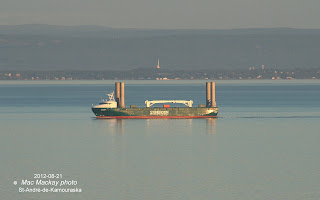 3. E-Ship 1 downbound from my front porch in Quebec. The ship is about 5 miles away, and the church spire is more than 10 miles from my vantage point, so this is the best that can be expected from a 300mm lens.
Posted by Mac at 1:58 PM