The Walter Gray - back again [and update]

The small deck ferry Joshua Slocum was built in Halifax in 1973 by Halifax Metal Workers for the Minister of Highways. It  entered service on the short run between East Ferry, and Tiverton, Digby, County. Fitted with twin steerable props - one at each end, it could carry 15 cars (or a combination of trucks, school buses and cars). At each end of the run it would shove its own ramp onto a shoreside ramp to load or unload. It was essentially double ended, meaning it did not have to turn in the very stiff tidal currents running through Petite Passage. It was expected to carry 54,000 vehicles per year.


1. Joshua Slocum approaching the landing ramp at East Ferry. Note the strong tide sweeping the ferry's wake.
2. Docked at Tiverton, again note the tide. The ferry maintains its position at the dock by keeping full power on its props.

It operated on that run until 2004 when it was replaced by the Petite Princess, built by Halifax Shipyard.
It was then purchased by Beaver Marine, and stopped off in Halifax en route to Point Tupper where it was laid up for a time. It was then sold for fish farming use, and renamed The Lost Joshua and later The Walter Gray. 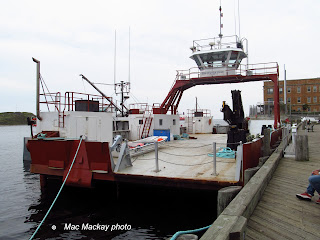 3. In its new role it has been fitted with a knuckle boom crane, and one leg of its bridge support has been straightened. 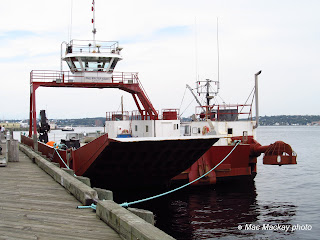 4. One propulsion unit has been swung up out of the water. The engine house is on deck, with a direct connection to the drive unit.

It is now back in Halifax for the third time with another boat called Juggerknot, which is also a fishing vessel. but is presumably towing the former ferry. Juggerknot does not seem to be registered under that name.

Update:
The Walter Gray sailed on the evening of September 24 for Port aux Basques, under its own power.
Posted by Mac at 8:23 PM