No sooner did Vectis Harrier [see previous posting] sail than Atlantic Compass arrived. In fact the ships passed in the Basin after Compass cleared the Narrows.

1. Some close quarters work as Atlantic Compass sails the Narrows. The new Pier 9 C extension is to the right. 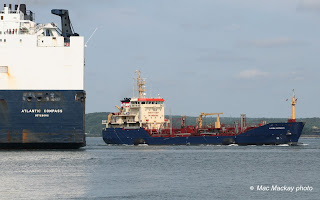 2. Algoma Dartmouth had just completed bunkering Vectis Harrier and waited for Atlantric Compass to clear the Narrows, before heading to the cable ship Wave Sentinel.

Vietnam Express had arrived early in the morning and in the evening moved out to anchor to free her berth for Pusan. Atlantic Compass sailed Saturday night.

3. Pusan steaming in on Saturday afternoon. She is on chartter to Hapag-Lloyd.

Canada Express arrived early this morning (Sunday) taking Pusan's place, and Vietnam Express moved  from anchorage back in to Fairview. 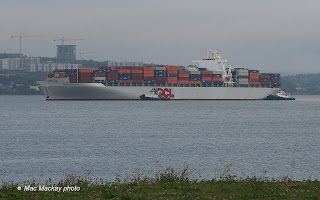 4. Vietnam Express has her anchor up ready to back alongside.

Also on Sunday the autocarrier Seven Seas Highway arrived at Autoport and tow tankers sailed from Imperial Oil. The chemical tanker Sichem Contestor and the crude carrier Energy Sprinter.
The cruise ship Disney Magic was in port Sunday, and the container ship Marwan anchored in the harbour and will dock Monday morning. 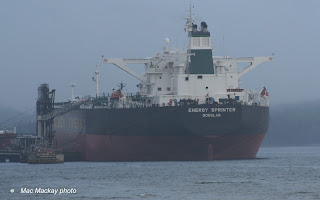 5. Energy Sprinter will soon be getting underway from Imperial Oil dock 5, as a storm approaches offshore. 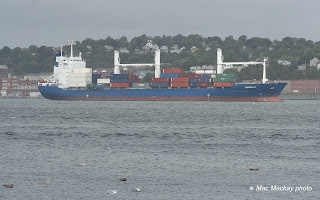 6. The gulls are aware of the tropical storm that will pass to the east of Halifax, and have, like Warwan sought shelter in port.
Posted by Mac at 9:59 PM