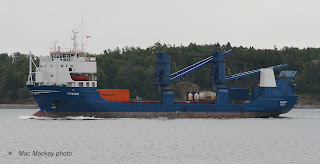 After a lengthy refit in the Ukraine, the Fusion is back on the job. Since it left Halifax in April, the Halifax to St-Pierre et Miquelon service was been carried out by the cargo ship Nils B.
Fusion is ideally suited to the service because of its small size and RoRo capability, but is getting on in years. The refit must have been extensive, and one hopes it will be enough to keep the ship going reliably until completion of her contract.
Built in 1977 by Blohm & Voss, the ship measures 2279 gross tons, has a capacity of 219 TEUs and has two 30 tonne cranes. It has carried twelve names in its career, and has served the St-Pierre service off and on since 2007, first as Fort Ross, and since August 2010 under its present name and under a three year contract.
Posted by Mac at 5:28 PM