HMCS Iroquois and HMCS Athabaskan - back when 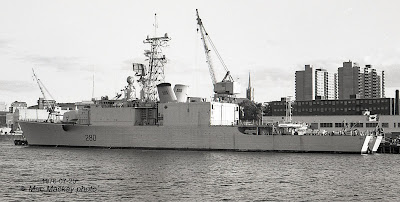 As orginally configured the four Tribals including HMCS Iroquis and HMCS Athabaskan had canted funnels, giving them a truly distinctive and even racier profile. Unfortunately it gave them a too distinctive radar and heat singnatures, and they received conventional funnels, similar to Halifax class during their TRUMP refits.
A recent posting on Boatnerd  (go to Information Search) had some photos of Athabaskan in refit at Seaway Marine & Industrial in St.Catharines (Port Weller). A huge tarped staging  had been built around her mast, but that has now been removed. It is still hoped that she will be completed in time to leave the Seaway before freeze up.