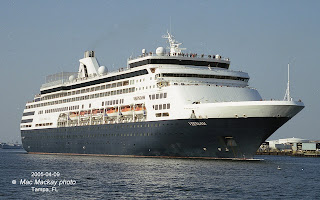 Press reports indicate that the Holland America ship Veendam arrived in Sydney, NS this morning with 2,000 passengers. Among them were twenty exhibiting the proverbial "flu-like symptoms." The sick passengers were reportedly confined to their cabins.
The ship is due in Halifax tomorrow, September 20, which may result a repeat of the last similar incident. when contagious passengers and crew were unleashed on Halifax infecting many on shore. These nasty gastro-intestinal ailments are common on cruise ships due to improper sanitation and  are entirely preventable.
Perhaps the whole ship should be quarantined and forced to sanitize itself and sent off to some other port-preferably in another country.
Posted by Mac at 5:38 PM