HMCS Iroquois - does life begin at 40 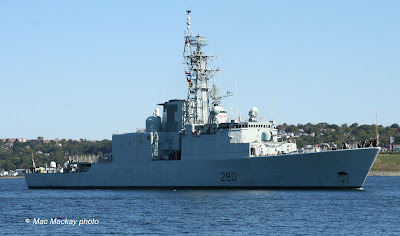 This year HMCS Iroquois is celebrating the 40th anniversary of her commissioning into the RCN July 29, 1972. Laid down at Marine Industries Ltd in Sorel, Qc on January 1, 1969 and launched November 28, 1970, she is the lead ship of the Tribal class destroyers. [Sister Athabaskan was laid down June 1, 1969, launched November 27, 1970, but was commissioned later on September 30, 1972. She is now in refit at St. Catharines, ON.] Both received extensive upgrades in 1994-95.
Despite her years, Iroquois continues to be a sleek and powerful vessel. I missed getting a photo of her on a celebratory day trip last week - she slipped in and out too fast for me to catch. I was luckier this morning since she had to reduce speed to allow a tour boat to dock, so I caught up with her as she passed the Tall Ship Quay.
As Canada's oldest fighting ship, she certainly does the RCN proud.
Posted by Mac at 10:53 PM