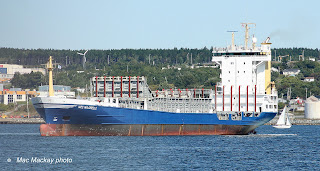 1. WEC Majorelle conducts a compass swing in number one anchorage area Friday.
The story ends here for American Feeder Lines, with the sailing Friday of WEC Majorelle.  First seen here as AFL New England, the ship was to be the first in a fleet of coastal container ships providing a feeder service between major ports on the east coast of Canada and the US.
Unable to generate enough cargo out of Halifax, and even less return cargo from Boston and Portland, the service was finally terminated in April. With mountains of debt surrounding the operation the ship was finally impounded and sold at auction.
The new owners renamed the ship WEC Majorelle and she sailed on Friday September 14 for Casablanca. That port is a hub for West European Container Lines BV, a Dutch firm, formed in 2009, but with roots going back to 1978. It has expanded dramatically from short sea routes to incoporate about 20 different lines covering Spain/ Portugal, the West Indies, North and East Africa.
See more at http://www.weclines.com/
Most of their fleet appear to be small hatchless container ships similar to WEC Majorelle. 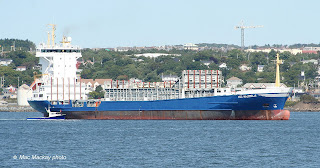 2. The launch Captain Jim comes alongside to disembark the compass adjustor, as the ship heads for sea.
Posted by Mac at 8:28 PM