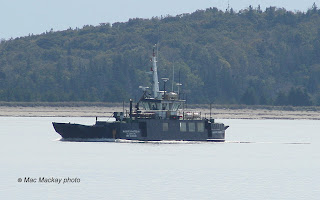 The diminutive car ferry Marine Coaster III arrived today and tied up at pier 28. Built in 1976 and measuring only 112 gross tons, it was originally the Lady White Head and ran between Grand Manan Island and White Head, NB in the Bay of Fundy. When its replacement was delivered last year, the ferry was sold to the Puddister Trading Co of St. John's and acquired its present name.
It is en route to Newfoundland, where the residents of Bell Island hope it will enter service to from Portugal Cove.
Why does it carry the number 'III" you may ask?

Puddister Trading Co is an old established ship operator in Newfoundland, and over the years have owned many small cargo and passenger ships, and this is the third Marine Coaster they have owned.

The first Marine Coaster began its life in 1902 in Paisley, Scotland as the Druid, built for the Canadian Minister of Marine. Its builders, Fleming and Ferguson, produced the 160 foot, 503 gross tons ship as a lighthouse supply vessel. Powered by a 60 nhp steam engine it worked out of the Quebec Agency of what eventually became the Department of Transport.It was sold in 1950 and converted to a diesel powered cargo ship and carried the names Steve Ahern, Ile Verte, Vega, Eva Marie and Eva until purchased by Puddister Trading Co in 1971 becoming the first Marine Coaster. 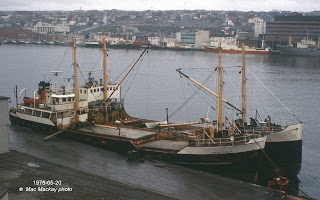 2. The Marine Coaster outboard of the Marine Trader in St.John's.

As a cargo ships it travelled far and wide including the Great Lakes several summer supply trips to Hudson Bay in 1956, 1962, 1963, 1968, [and perhaps other years also]. It delivered 90,000 lbs of cod to Hubbards, NS in 1966, and was often chartered to CN Marine for freight service around Newfoundland and up and down the Labrador coast. It also filled in as temporary ferry between St. Barbe and Blanc Sablon in 1976. In 1977 it was hired as a base ship to search for the wreck of the William Carson which sank in ice off Labrador.
In 1977 the ship had finally reached the end of its useful life and was laid up. In December 1986 it was towed out of St.John's and scuttled at sea. For more data see: http://greatlakes.bgsu.edu/vessel/view/001768

The second Marine Coaster was one of six search and rescue ships built for the Canadian Coast Guard in 1963.  Named Rally it was capable of 15 knots, powered by two 1200 bhp engines and measured 140 gross tons. Built by Davie Shipbuilding in Lauzon, QC in June 1963 it conducted trials from Chester, NS in July. Not long after entering service it suffered majort storm damage and had extensive repairs at Stenpro in Liverpool. It served the CCG until 1983 and figured in a good many rescues and towed countless fishing boats into various Nova Scotia ports. 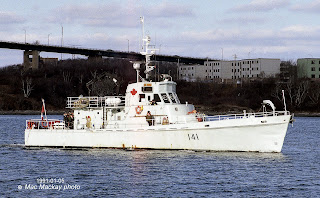 It was taken up by the RCN in 1983 for reserve training and assigned pennant number 141. After nearly ten years of use it was sold to Puddister Trading in December 1993 but was not renamed until July 1995. It was modified to carry 40 passengers and light freight ferry to such ports as Rose Blanche, Las Poile and Grand Bruit until 2009 when it was retired from service. Although it has been for sale, it is need of major repairs and remains laid up.
Posted by Mac at 10:01 PM