Nova Star -what did LDA know that we don't 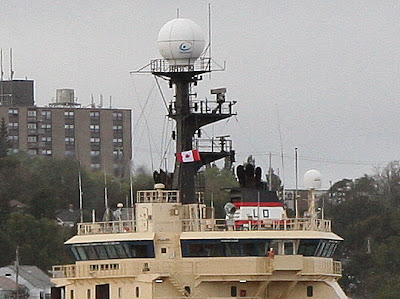 1. LD - for Louis Dreyfus - is a prominent French vessel operator. Their funnel mark appears on the cable ship Ile de Sein that was in Halifax last week.

In 2007 the French ferry operator Louis Dreyfus Armateurs (LDA) ordered a new ship for their recently acquired Le Havre to Portsmouth ferry crossing. To be called Norman Leader, the 1200 passenger ship was to be delivered in late 2009 or early 2010 but the delivery date kept stretching. In the meantime LDA consolidated routes and some observers believe that the new ship was no longer needed. On March 17, 2011 LDA cancelled the order for the ship citing the builder's failure to meet specifications and delivery dates. The coincident  economic downturn and drop off in traffic were not cited, but might have added to the situation.

The builders, ST Marine, a division of Singapore Technologies, along with Bureau Veritas as classification agency, meanwhile had put the ship through trials in October 2010 for delivery in April 2011. By October 2011 LDA and STMarine had settled their differences out of court. STM reportedly paid LDA 10% of the purchase price of the ship.(The original contract price was quoted by most sources as US$100mn).

STM was left with the ship. They teamed up with Quest Navigation of Eliot, Maine to form STMQuest and in August 2013 they were the winning proponent for the new Yarmourth, NS to Portland, ME ferry service to start in 2014. The ship, to be renamed Nova Star, will run under the Nova Star Cruises banner, but will be managed by International Shipping Partners of Miami. The Province of Nova Scotia is fronting the company $10.5mn  to start up and $1.5mn per year over seven years for promotion, but has insisted that the operation must be self-supporting and have not committed to any operating subsidies.

Press reports today brought up the "deadweight issues" that LDA had with the ship. (Deadweight tonnage being the total weight of cargo, passengers fuel and stores that a ship can lift.)
Historically, deadweight issues on cross Channel ships were quite serious as they effected design draft and thus freeboard. One ship, Barfleur, had to be lengthened 5 meters, basically to spread its deadweight out over a larger area, so that it could sail fully loaded at its design draft and with safe freeboard.
Having sailed on the Le Havre to Portsmouth service myself (when it was operated by P+O), I am aware that the ship is usually full, and there is heavy truck traffic. Neither is likely to be the case on the Yarmouth-Portland run, which is aimed mostly at tourists.
Press reports in 2007-2009 said the ship was to have a deadweight tonnage of 4,000 tonnes at design draft and 5,250 tonnes at maximum draft. The latest data I have says the ship's deadweight tonnage is 4,145 tonnes.

Therefore I agree with the various commentators that there is no deadweight issue here.

If there were other failures to meet specs that we don't know about that might be concerning. However Bureau Veritas certified the ship for "short international voyages" which would seem to indicate that the ship could be suitable for Gulf of Maine work, with perhaps some modifications and freeboard restrictions.
Therefore it seems to come down to late delivery - which is irrelevant now. (The cross chaneel run from Le Have to Portsmouth was a five hour trip at 20 knots in May 2000.) The Gulf of Maine is perhaps noted for more severe weather than some part of the English Channel, and the compensation for that is usually greater freeboard.

The "deadweight issue" may just be a grab at sensationalism, and I don't want to be seen as piling on, so my conclusion is - wait and see, give them a chance.