Acadian - next for refit

The Irving Oil tanker Acadian arrived in Gibraltar July 18 for the fitting of an exhaust gas scrubber. This is the second ship in the fleet to get the device that allows the ship to continue to burn heavy oil but still comply with the new low emissions requirements in US and Canadian coastal waters. 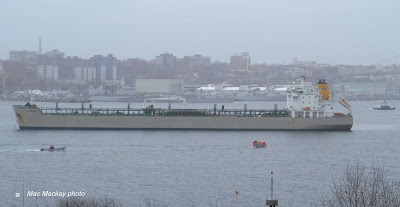 In the meantime Irving Oil has applied for a coasting license to use the Marshall Islands flagged sister ship New England to make trips from Saint John to Belledune, NB, and Dartmouth, NS carrying jet fuel, marine gas oil and  diesel fuel and from Saint John to Quebec or Montreal with diesel fuel between the dates of July 28 and August 26. Neither it nor sister Great Eastern have been converted yet, but will likely follow in turn..

All four tankers are on long term charter from Iver Ships (formerly known as Vroon) and were built by Hyunai Mipo, in Ulsan, South Korea.