One Two for Fairview Cove

Two ships arrived for Fairview Cove this morning, one after the other.

Inbound approaching Ives Knoll, NYK Rumina was an imposing sight with its lofty superstructure, but with most containers only stacked three high. The ship appeared to be rolling somewhat.

First along was NYK Rumina a 55,534 grt, 65,981 dwt ship built by Hyundai Samho in 2010. With a capacity of 4922 TEU (including 330 reefers) the ship flies the Singapore flag. Although owned by an offshoot of the NYK Line of Japan, it is managed by Columbia Ship Management of Limassol, Cyprus. 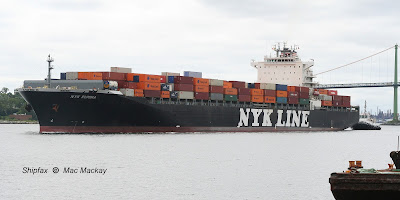 With the escort tug Atlantic Oak secured astern the ship makes its way up through the Narrows to Fairview Cove.

Only one half hour behind, Seoul Express made a slower approach to give the tug Atlantic Oak time to return through the Narrows for escort. Even so it was not until the ship had passed under the Macdonald Bridge that the tug was secured. Ships of this size are supposed to have tethered tug escort from bridge to bridge. 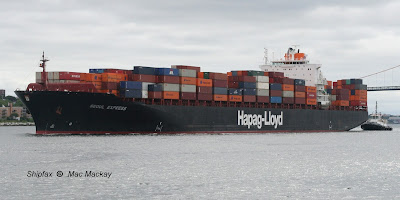 Seoul Express is carrying its containers four to five high as it transits the Narrows with Atlantic Oak finally secured astern.

Seoul Express was built in 2000 by Hyundai, Ulsan as Bremen Express, and has been a frequent caller here since new. Taking the name Seoul Express in 2007, it made its first call here with that name October 9, 2007. It is owned directly by Hapag-Lloyd and flies the German flag.