The Canadian Coast Guard is keeping CCGS Samuel Risley as it fills in for both Sir William Alexander and Edward Cornwallis. It has been buoy tending on short trips out of Halifax and participating in SAR ops. This afternoon it sailed for the south shore, with the eventual destinaiton of Shelburne. On its after deck was buoy TC 52 for Pollock Reef Shoal in the Lunenburg area (44 14 38.3 X 64 14 28.7) 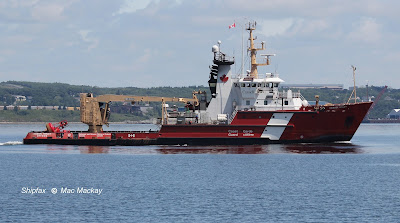 On loan from the Great Lakes, the ship may well be working here until the late fall.

Atlantic RoRo made one of its infrequent calls with Baltic Mercur II. A "second generation" ship, replacing the Astrakhan class ship[s, now mostly  scrapped, the ship is a versatile one even if it does not have RoRo capability. See previous post on the subject: http://shipfax.blogspot.ca/2015/01/astrakhan-loros.html