Barges for the Big Lift Project

This summer will see the start of the Big Lift project to replace the decking of the Angus L. Macdonald Bridge across Halifax Harbour. Fabrication of the new deck sections will take place at Cherubini Metal Works Eastern Passage plant in Eisner's Cove.
Where the bridge spans over water the old sections will be lowered down to barges and the new components will be hoisted up from barges during overnight operations. The bridge will be closed periodically while this work takes place.
See all the details here: https://www.hdbc.ca/redecking/

Contractors, American Bridge Canada Company have hired two barges from Groupe Océan of Quebec, which are due in Halifax this afternoon. They will be towed into port by the tug Océan Arctique which has an interesting connection with Halifax - see Tugfax
Both barges have been in Halifax before and it might be a surprise to learn the circumstances of one of them.

Timberland is in fact two barges connected together. No one knows for sure when the barges were built or exactly where, but they came from the New York area in the 1970s when Halifax Shipyards was building oil rigs. The two scows had their sterns squared off, then they were joined together to support a tall crane built by the Timberland Co of Woodstock, ON. Once the crane was on the joined barges, they became known unofficially as Timberland. Since the crane barge was trapped between the two bridges, it was deemed to be "not for transportation use" and was thus never entered into Canadian registry.
The crane was something of a landmark in the harbor for many years, usually tied up at Pier 6. 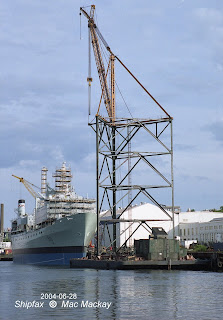 Over the years the crane fell into disuse, and as Irving Shipbuilding began to modernize the yard, they dismantled the crane tower and sold the barge to Groupe Océan in 2008. It was then registered as Timberland for the first time in 2008.
It measures 799 gross tons with dimensions of 44.31m x 25.04m x 2.95m.

Océan Abys was built by Marine Industries Ltd in Sorel, QC for the Beauharnois Light + Power Co. It may have been called Beauharnois temporarily, but it was soon renamed Growler. (The name recollected an American sloop of war that was captured by the British on Lake Champlain in the War of 1812.) The barge carried a large deckhouse that contained a work shop and supported construction at the site of the dam and powerhouse adjacent to the St.Lawrence Seaway locks at Beauharnois.
In the mid 1960s it was sold the Marine Industries Ltd renamed MIL 497. When MIL wound up its operations it became Omni No.1 for Omnimar ,a Sorel based tug and barge operator. At that time it was rebuilt, with grt changing from 633 to 583 tons, likely reflectng the removal of a small deck house. It then carried a large construction crane.
Groupe Océan acquired the Omnimar company and gave it the name Océan Abys in 1994.
Now classed as a pontoon, over the years it has served as a flat deck scow, a crane barge, and a landing stage, with the installation of a large ramp. It was last in Halifax from September 2000 to June 2001. 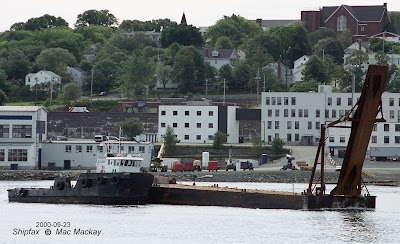 The tug Ecosse brought it in to Halifax on September 23, 2000 after working on the St.Marys River. It remained idle until it was towed out again June 5, 2001 by the tug Salvage Monarch.

Arrival of the tow is now scheduled for this afternoon, but weather and visibility have already delayed its arrival since yesterday afternoon. Today's plan is for the barges to go to Pier 9C and the tug to go to an unknown berth for fueling. A small tug, likely the Belle D will handle the barges once they near the Macdonald bridge.