The "new" Digby to Saint John ferry Fundy Rose sailed from Halifax for Saint John this afternoon, but there is no word on when the ship will actually enter service. Bay Ferries have stated that there will be at least a week of trials in both ports as well as crew orientation and training before the ship could replace the venerable Princess of Acadia. 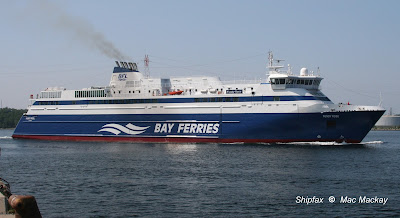 Fundy Rose took off from pier 9B like a race horse this afternoon.

The replacement process was initially delayed when the former Blue Star Ithaki was not available in the fall of 2014. It finally did arrive in Halifax on December 5, 2014 as Canada 2014 and was idle for a time until the refit actually began. Since then it was been a beehive of activity up to the time of its sea trials. I assume that work was being conducted under the direction of the federal government - actual owners of the ship. At some point after the sea trials June 9 and 10 it was handed over the Bay Ferries for their own work and that has involved a smaller number of workers. The estimate of the refit time was correct, but it started too late to hit the peak tourist season, which is right now. 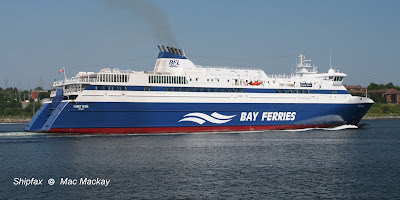 Absolutely spotless in appearance the ship made for sea.
When the ferry enters service, perhaps later this month, there will still be the issue of whether it can handle the expected truck traffic during the busy fishing season in southwest Nova Scotia. The Princess of Acadia can handle 21 trucks, but the Fundy Rose can only handle 14. Although the operators have promised extra trips to meet demand, it is more a question of timing since fish products must arrive in the Boston market at a specific time. All that aside it will be good to see the handsome ship in operation.

What the future holds for the Princess of Acadia has not been announced, but expect to see it laid up for a time before it is sold for scrap.
Posted by Mac at 5:03 PM