In despicable weather and hemmed in at pier 27-28 as it was, I consider myself lucky to have got a mostly unobstructed view of the Wallenius Line large car truck carrier Oberon. 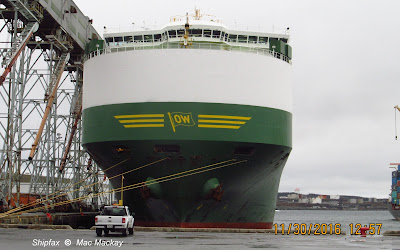 Built in 2007 by Daewoo Shipbuilding and Marine Engineering, the 71,673 grt ship, with its sister Aniara, are the largest of their type, with an 8,000 car capacity. After unloading cars at Autoport yesterday (and taking bunkers - something fairly rare for autocarriers) it moved over to pier 27-28 today.
The Nirint ship Asian Moon was occupying pier 31 - the usual berth for RoRos on the Halifax side - and it was a fairly tight squeeze to get the Oberon's bow far enough in at pier 27 to allow its ramp to extend out onto pier 28. The pier is 380 meters long and the ship is 231.6m without the ramp. Allowing some room for head lines and the large ramp (which is angled at 27 degrees from the ship's centre line), and turning space at the end of the ramp, it took up almost all of the available pier.
Fortunately the ship does not have projecting bridge wings or it certainly would have interfered with the grain galleries at pier 27.

Not just a car carrier it can also handle trucks and buses and what is termed 'high and heavy' loads too. Today's cargo included the usual tree harvesters and a number of other pieces of wheeled machinery.