Halifax's anchorages were in good use today for tow ships, neither of which will load or unload cargo here.
First in was the tanker Endeavour, arriving from Montreal in ballast. Flying the Singapore flag, the ship was built in 2004 by STX Shipbuilding in Jinhae, South Korea, a mid-range tanker of 30,032 grt, 46,1201 dwt. It is operated by Transpetrol. Tanker Management of Norway. 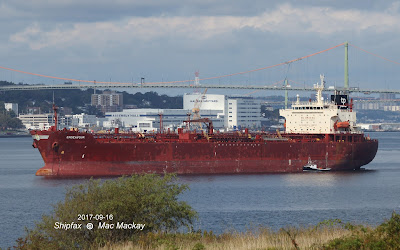 The purpose of this visit is for hull cleaning, and the workboat was soon alongside with its scrubber machine. This kind of work used to require drydocking, but with current technology the work can be completed with the ship afloat. Aside from removing harmful marine growth, and possible invasive species, hull cleaning also result in major fuel savings by decreasing hull resistance. 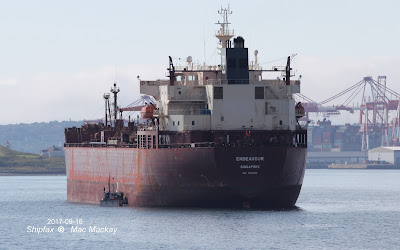 Late this afternoon the fully laden bulk carrier  KSL Seville arrived from Sept-Iles, QC carrying iron ore. Because of its size, it was met at the outer pilot station by two pilots and was soon joined by two tugs. As it crept into port it soon obvious why two tugs were required. Due to its great draft (reported to be 17.2m) the pilots used the deep water (western channel) which requires a sharp dogleg to return to the ranges of the main channel. The stern tethered escort, Atlantic Fir was used for braking, but also swung far out abreast to turn the ship.  Meanwhile Atlantic Oak, stationed forward also assisted in turning by pushing the bow. These large bulkers generally do not have bow thrusters, so the second tug was necessary.

KSL Seville returning toward the main channel from the western channel, the stern escort tug is pulling the stern around from the starboard quarter..


KSL Seville flies the Hong Kong flag for Front Seville Inc, part of the John Frederiksen conglomerate and is managed by his bulk carier copmany Golden Ocean Group Ltd. It was built by Shanghai Waigaoqiao shipyard in 2015 and measures a hearty 93,366 grt, 181,903 dwt.

Back in the main channel, the tugs are keeping the ship in line due limited steerage way art slow speed.

No reason was given for the ship's arrival, and there is no sign that it will be taking bunkers.