ZIM continues to bring in bigger ships. Today's first time arrival was the Hyundai Mercury, a ship owned by the nebulous Arzel Shipping Inc, and managed by Eastern Pacific Shipping (UK) Ltd. The latter is the London branch of a Singapore company that manages more than one hundred ships of all types. This particular ship, not surprisingly built by Hyundai Heavy Industries, Ulsan in 2009, has a capacity of 8562 TEU and measures 94,511 grt, 9581 dwt. 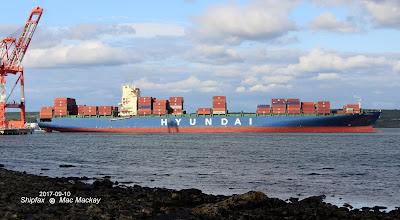 Hyundai Mercury just clear of Halterm, heads for sea.
The crane shadow neatly frames the pilot door let into the side of the ship.

The ship serves the ZIM Container Service Pacific route, and has worked its way up the astern seaboard from Savannah (Sept 2), Charleston, Norfolk and New York. It has now sailed for Kingston, Jamaica, then on through the Panama Canal to China and Korea before returning to the Canal, Kingston and Savannah by mid-November to start the rotation all over again. 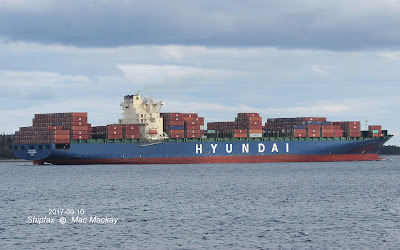 Leaving its last east coast port and heading for the hub port of Kingston, Jamaica, the ship is fairly lightly loaded, since most cargo is likely imports from China and Korea.