Onego Ponza - another load of rails

After only four days in port Onego Ponza is sailing this evening after unloading a cargo of rails from Poland. This is not the first visit for the ship. It was here in August 2009, March 2011 and again in September 2015, also with rails. 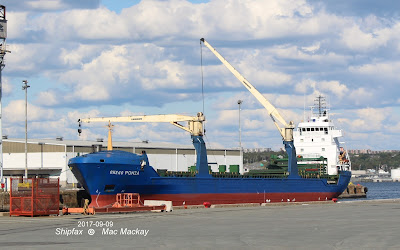 Onego Ponza with fresh looking paint, beginning to unload. Pontoon hatch covers have been lifted off by the traveling gantry and stacked fore (not visible) and aft.

Daewoo Mangalia shipyard in Mangalia Romania built the ship's hull and superstructure and it was completed by the Bodewes Volharding shipyard in Foxhol, Hoogezand, Netherlands in 2002. Launched as Sider Ponza, it was renamed Sider Monique on delivery. In 2009 it was renamed Onego Ponza by Eckhoff GmbH+Co of Jork, Germany. It has the usual box shaped holds and pontoon type hatch covers of a multi-purpose ship. It is also equipped with a pair of 40 tonne cranes.

As with many German ships it is is registered in Antigua and Barbuda. Its builder, an offshoot of Korea's Daewoo Industries (51%), and co-owned by the Romanian state (49%) is the biggest employer in the country. However with Daewoo's current financial woes at home and $1bn in accumulated losses for the Managalia yard alone, its share is likely to be taken over by Damen according to recent news reports.