Since the formation of THE Alliance earlier this year, there has been a dearth of HAPAG-Lloyd ships in Halifax. Other members of the block have been providing the ships on the various routes that call here.
However with the Chilean company CSAV holding 34% of H-L since 2014, the nature of H-L has changed and several CSAV ships have been folded into non-South American trade routes. The current H-L fleet consists of 219 ships both owned and chartered, with a capacity in excess of 1.6 mn TEU.


Among them is Palena which is owned by something called HL-4160 chartering (possibly associated with Southern Ship Management of Valparaiso, Chile) and since earlier this year the ship has been carrying full HAPAG-Lloyd livery, but still with a traditional CSAV name. 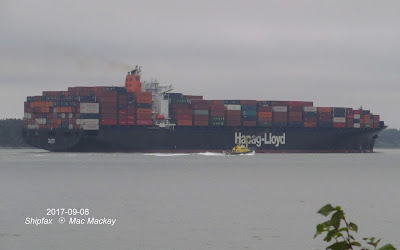 Palena sails this morning as the fog clears.