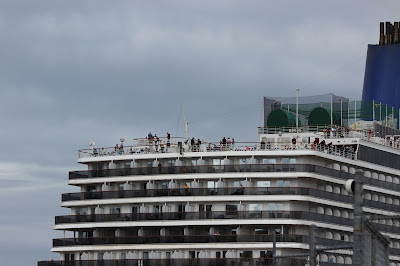 There was lots of activity on deck yesterday afternoon when the ship was originally scheduled to sail.

Ordered in 2003 by Holland America line as a Vista class, it was allocated to Cunard and was to be "Queen Victoria". Shortly before launch, June 26, 2004, it was transferred to P+O Cruises and completed by Fincantieri Marghera as Arcadia.  (All these lines are part of Carnival) The 84,342 grt ship has a capacity of 2358 max passengers and 976 crew and is propelled by electric azipod drives.

Fleet mate Aurora, which was here September 3 had a fire in the engine room September 20 while en route from Bermuda to the Azores and was drifting without power for about an hour.

Both ships cater to British cruisers and have subdued graphics compared to some of the exuberant floating bill boards we see, such as another ship that was in port today, AIDAdiva (see September 14) or its fleet mate AIDAluna on September 4.

.
I prefer the plain vanilla ships such as another of today's visitors- Silver Whisper. 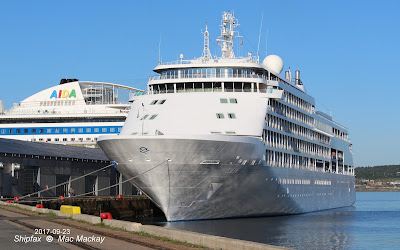 Built in 2000 by Mariotti, Genoa it has the understated elegance that is appropriate to an exclusive yacht-like ships. At 28,258 grt it carries only 382 passengers. When I checked two years ago it had the most space per passenger of any cruise ship with 74 gross tons per passenger and with 295 crew it also had the highest passenger to crew ratio of 1.3 to 1.


Update: Arcadia's long stay was due to rope entanglements in its prop(s). These were finally cleared, but not until the ship had missed three port calls. So it is not only whales that are suffering from phantom / abandoned fishing gear.