Wilhelmsen's Tiger made its second call in Halifax today. The first was March 1, 2016, but on that occasion it did not manage to pass my camera. 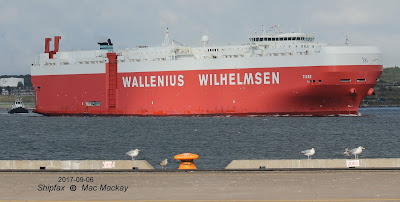 Atlantic Oak follows the ship out to Ives Knoll, but did not have a line up. - it was just going to pier 41.

Fitted for carriage of other roll-on, roll-off cargo, it first unloaded at pier 31 yesterday before moving to Autoport overnight. It's stern ramp is rated for 320 tonnes, so it can handle some pretty large rolling loads. 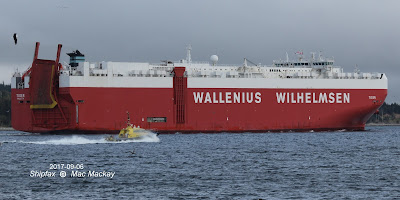 Scotia Pilot is smothered in spray as it paces the ship outbound.
.
Posted by Mac at 9:09 PM