As mentioned the other day, three of Halterm's old container cranes have been out of service for some time and apparently were not worth reconditioning.


Now we see that demolition has started on the first of the three. Two giant construction cranes have been set up at the end of pier 37-39 and crews have started to rig lifting gear to remove the boom on the first crane. 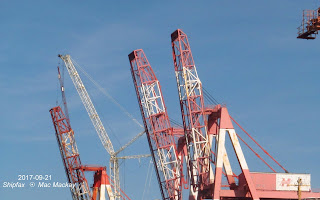 Two of the old cranes were moved farther east to accommodate the work. The remaining crane at pier36 (right) has also out of service for a time. 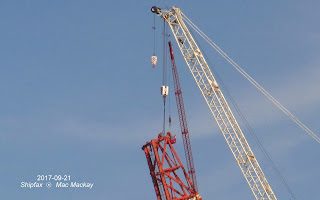 Workers at the top of the boom were lifted into place by basket.


There is still a question about the fourth crane, at pier 36, which has been out of service for a time. It was originally a typical crane but some years ago was fitted with special bogies allowing it to move from pier 36 to pier 41-42 on curved track. However that function is no longer possible with the four new wider track super-post-panamax cranes at pier 41-42.


Leaving Halterm with only four working cranes must be a major service issue for the operator, and some new cranes are obviously needed. There was talk of a new rudder tired crane, but nothing has been seen of that yet.


Fairview Cove already dismantled its oldest crane a couple of years ago, but also has smaller cranes that can't serve large ships fully due to limited height and reach.

By late this afternoon the first section of the boom was on the ground. 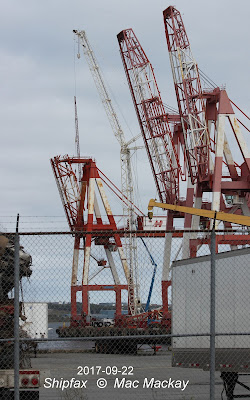