Now that is autumn-at least officially-the days are shorter, but we are still getting June like weather, with lots of sun and warm temperatures. Occasional fog and rain make it unpleasant for cruise ship visitors, but the old adage goes - if you if don't like the weather just wait an hour.


On Thursday however it was more like eight hours, but the weather changed dramatically from morning to evening.
Veendam  's passengers were treated to a genuine Halifax pea-souper when they arrived for 0900.

By late afternoon however the fog had gone, the skies were beginning to clear and the sun was blazing through at a low angle.


The Halifax side of the harbour was in shade as the bunkering tanker Algoma Dartmouth returned to her berth. 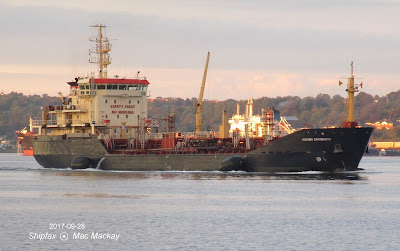 However the sun was still catching the tanker Hector N as it prepared to get underway after bunkering. The ferry Viola Desmond returning from Woodside was just entering the shadow from the Halifax side.

It was a good time to test a new pocket camera, which explains the low resolution of the photos.