CNAV Quest - Next one to go

The Canadian naval research vessel CNAV Quest (AGOR 172) is the next ship from the Atlantic force to head to the scrap yard. The tug Lois M ( the same tug that towed out the Preserver in August) arrived at HMC Dockyard this morning, September 12,  and is due to leave tomorrow. The destination is Sydport in Sydney, NS harbour, where Marine Recycling Corp has established a yard to break up ex RCN ships. 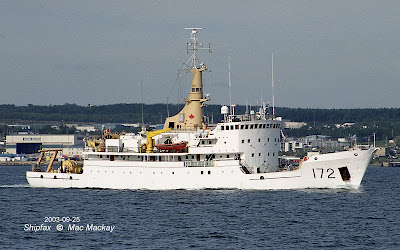 There are several references to Quest in this blog over the years, but to summarize, it was built in 1968 by Burrard Dry Dock in North Vancouver, and commissioned in 1969. Nominally a hydrographic research vessel (hence the white hull and buff funnel) it was assigned to the RCN and used by what is now Defence Research and Development Canada on a variety of under water acoustic projects.  A major refit from 1997 to 1999 somewhat marred its looks, particularly on the port side where an open alley was enclosed. Although laid up with stability and deck subdivision issues in 2009 , it was reconditioned for special projects and sent to Europe in 2011 with an unusual paint scheme of navy gray on the starboard side only. It also participated in arctic operations in 2012.

However in 2014 it was "parked" effective March 31 due to lack of funding for the next fiscal year. It has not sailed since. Decommissioning was announced September 2, 2016 and the ship was sold in March of this year.

This leaves the now decommissioned Athabaskan still occupying a berth in the Dockyard. It is still being prepared for the inevitable.