Maersk /CMA CGM had to scramble when Maersk Pembroke caught fie August 21 in the Celtic Sea on its way from Belgium to Montreal. While the ship had to be towed back to Europe for repairs, the containers it was due to pick up in Montreal and Halifax sat on the pier waiting for the next ship.

Maersk or CMA CGM found the container ship Angeles on short notice and brought in on line, picking up the transshipped cargo from Maersk Pembroke. After sailing from Europe to Montreal, it reached Halifax today. Maersk Pembroke's scheduled arrival in Halifax was September 2. In the meantime Maersk Penang "lapped" the ship and was here last weekend and EM Kea is due tomorrow, both on their regular schedules. I am not sure what cargo they would have loaded here, but perhaps there was some backlog. 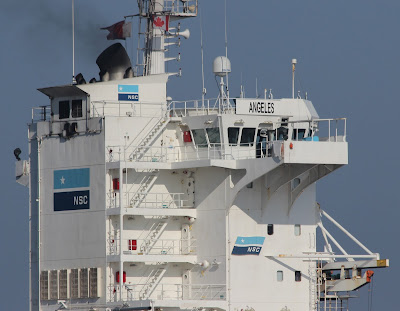