Rotterdam, co-flag ship of Holland America Cruises (with Amsterdam) made one of the shortest port calls on record today. It was less than an hour and a half  from arriving at the pilot station to clearing again, and within those tight confines obviously had no time to tie up securely at pier 31. Shortly after 0800 I saw the ship in the stream off Halterm heading seaward, so it must have made very good time outbound.

The ship is en route Rotterdam to Boston via St.John's and was originally scheduled to spend the day in Halifax. However its name was removed from the official Cruise Halifax web site at some point.

In view of the high winds and driving rain today, and iffy forecasts for the next few days, perhaps the line decided not to lose time en route to Boston and scrubbed the official visit. Why it called in at all remains a mystery. 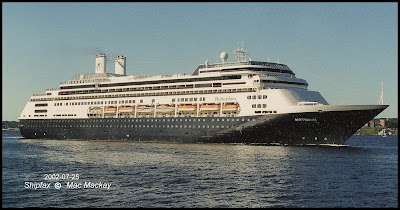 File photo from 2002 - definitely not today.

Built in 1997 by Fincantieri Marghera, Italy, the 61,849 grt ship has a capacity of 1404 to 1685 passengers and a crew of 620. It made its first call in Halifax May 13, 2002 and has called fairly regularly since. Its current schedule sees it touring Europe in the summer, and South America in the winter, with a brief fall season on the eastern seaboard.

After arriving in Boston September 9, the ship is due in Halifax again September 11 and 25 and  October 5 and 9.