A small drama unfolded in Halifax harbour Sunday evening when the party /tour boat Harbour Queen 1 lost power during a tour. The boat drifted inside the Halterm pier extension onto the breakwater.

It took the combined efforts of the Halifax Tugger and Atlantic Oak to get the boat off and back to its base at the Cable Wharf.

Divers were to examine the boat for damage today, and before it re-enters service there will be an investigation to determine why it lost power. 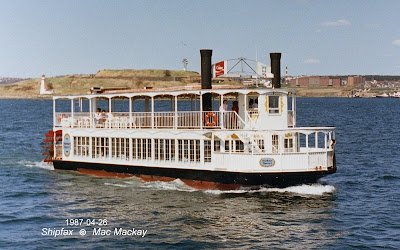 Harbour Queen 1 shortly after entering service in Halifax in April 1987.

Harbour Queen 1 was built in 1985 in Oromocto, NB as Pioneer Princess II and operated tours out of Fredericton for a couple of years before making the voyage to Halifax. An imitation of a Mississippi river boat, it has a pair of dummy funnels and a motorized paddle that does not propel the boat. 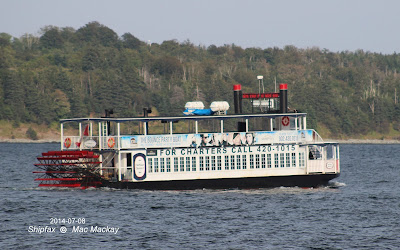 I am not sure anyone is fooled by the paddle, but it is part of the package. 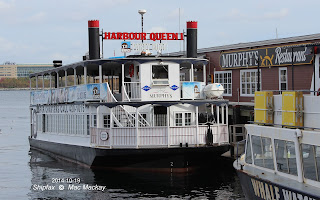 The boat is equipped with an anchor (see port bow above) which was deployed when it went adrift, but likely did little to stop the boat.

Vessel operators Murphy Sailing Tours Ltd will certainly miss the services of this vessel as we are entering the height of the cruise season, with three ships in today (Veendam, Norwegian Gem and Insignia.)

Today Halifax Tugger was back at its more prosaic duties, wrangling the garbage scow from the cruise ships, such as the Insignia. 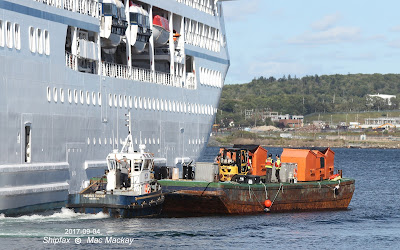