It was a return visit for the multi-purpose / heavy lift/ general cargo ship BBC Michigan this morning. After its first brief call here on February 8 (see my post  http://shipfax.blogspot.com/2019/02/bbc-michigan.html), this one will be brief too, with the ship sailing tomorrow morning. 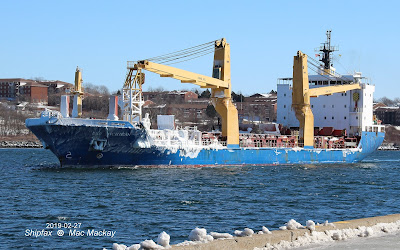 While its last visit was in driving sleet and rain, this time it was sunny and clear. In the intervening weeks the ship continued on from its last port of New London, CT to Sorel, QC. While upbound on the St.Lawrence it experienced heavy freezing spray, to the point that it reported one of its anchor windlasses unserviceable due to ice build up. It was allowed to proceed on to Sorel where repairs were to be made. It then sailed from Sorel February 24 giving Halifax as its destination. Again it does not seem to be here to work any cargo, so perhaps more repairs are needed.
It certainly accumulated more frozen spray on its way to Halifax. 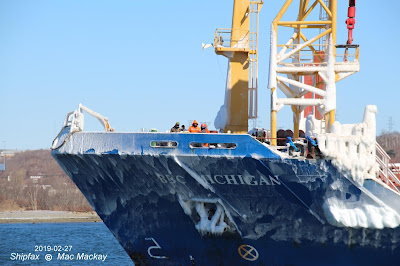 Even if the crew does not spend the day chipping ice, the ship will soon be free of the encumbrance, since it will head out from Halifax on its way to Port Everglades, FL. From Port Everglades the ship is expected to head for the Panama Canal, US west coast and Far East. 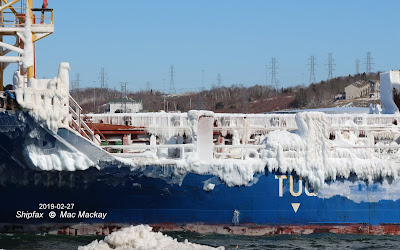 As mentioned in the last post, the ship was laid down by Jiangdong Shipyard in 2007, launched in 2008 but not delivered until 2010. The reason for this appears to be that it was part of the large order of ships from Beluga Shipping, which was cut short when Beluga collapsed under a heavy debt load, amid allegations of corruption. This is in fact a Beluga F-Class ship, but was never delivered to Beluga.
Instead W. Bocksteigel took delivery as technical manager, for a limited partnership and placed it in the commercial pool of BBC Chartering, operated by Briese Schiffahrts of Leer, Germany.
Bocksteigel manages about 90 ships and BBC Chartering operates about 150 ships.