The cargo ship BBC Michigan  made a brief call at pier 27 today. The ship is en route from New London, CT to Sorel, QC and appears to be in ballast, or very lightly loaded.  A member of the large BBC Chartering fleet, it could be carrying a special project cargo, since it is equipped for heavy loads. Its two cranes, rated at 150 tonnes each, can be combined for a 300 tonne lift. 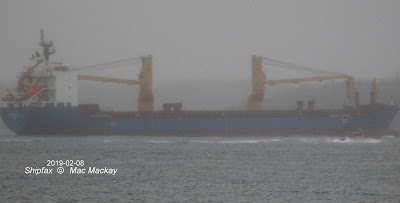 Neither rain nor sleet nor gloom... all of which were present for the BBC Michigan's departure... kept the ship from sailing, nor a navy? fast craft from whizzing by.
Photo editing actually shows more than I actually saw.

Its visit to Halifax was not to load or unload as far as I could tell. However Logistec has operations in New London, Halifax and Sorel, so there is likely some tie in such as re-securing cargo.