Join the Crowd at Pier 9

The cargo ship Unistar managed to find a parking spot at the Richmond Terminals piers this afternoon. It was able to squeeze in at the far north end of Pier 9C to load a cargo of large diameter pipe. 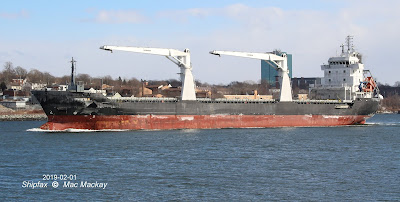 The German owned, Antigua and Barbuda flagged ship was built by Jiangsu Yangzi Chinbo Shpyard in Jingjiang in 2012 as Sinus Roris. It was soon renamed Thorco Aurora and carried that name until 2017 when it became Unitrader. The 6351 gt, 9688 dwt ship arrived in ballast from Belledune, NB. After picking its way through ice in the Gulf, it picked up some frozen spray on its way down the coast.

The crowd at Richmond terminals included, (left to right)
At Pier 9 the Horizon Enabler at IT International Telecom, fitting out for a cable job.
At Pier 9B the tanker Kivalliq W. cleaning up after a generator compartment fire. Work must be completed as the ship will be moving to Imperial Oil tonight to finish unloading.
At Pier 9C south the ferry Fundy Rose in for its annual refit. The hard working Digby-Saint John ship is due to return to service on or about February 25.
The tug Atlantic Willow is just standing off to meet the next inbound, and at its bow is the standby vessel Atlantic Tern. Its orange hull is barely visible.
And Unitrader has just been secured at Pier 9 north. It is deploying one of its cranes to assist with bunkering
Farther south (out of the picture at the left) the McNally dredging plant is tied up for the weekend.

The next inbound was a similar looking ship, Bandara. However it was built by the Shipyard Zaliv* in Kerch, Ukraine in 2010. The 5425 gt, 7120 dwt ship flies the Dutch flag. 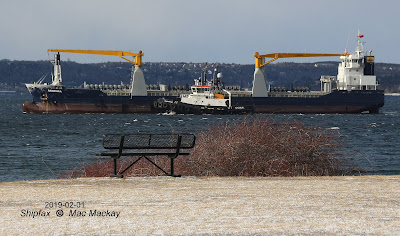 
Carrying a shipment of spent uranium casks on deck, the ship was bound for Fairview Cove to unload. The casks are carried in container frames and are trucked to the US for processing. Perhaps due to the nature of the cargo, and the breezy conditions the ship was assigned two pilots and took two tugs (Atlantic Larch is on the starboard side). The ship is likely on charter to Spliethoff's, since that company has been carrying this cargo recently.

[* The Zaliv shipyard is located in the Crimea, in an area illegally annexed by Russia in 2014. The shipyard was seized and taken over by what may have been Russian forces. In any event it is currently shuttered.]

Also off Africville the survey launch Sea Quest [Registration Number C28064NS) was going over the dumping ground for fill from Halterm dredging. The boat belongs to CSR Geo Surveys and was quietly going about its business. It is the same boat that was blockaded by fishermen in Pictou last year in a dispute over a proposed effluent discharge pipe from the Northern Pulp mill.

The boat is a locally designed and built Rosborough RF-246 and is powered by twin outboards.