On the coldest day of the year so far, and possibly the longest period of sustained winds, the chemical tanker Sichem New York made port this morning, and anchored.  The ship was built in 2007 by Samho, Tongyeong, South Korea and has epoxy coated tanks for carrying a variety of products. It measures 8,4555 gt, 12,945 dwt. Owners, Team Tankers, incorporated in Bermuda, but trading on the Oslo stock exchange, has jumped to fifth on  the list of  the world's chemical largest tanker fleets, now with 52 ships. (38 owned and the rest leased). 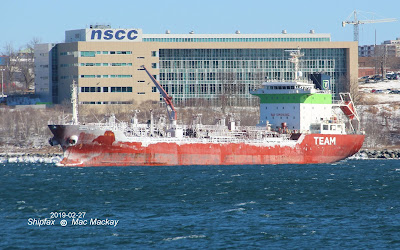 The ship is en route from Saint John, NB to Trois-Rivières, QC and made considerable ice so far. It seems likely the crew are clearing a lot of that ice today before proceeding.

The Gulf of St.Lawrence is nearly 90% covered with ice, and coupled with the recent high winds and frigid temperatures, it may be wise to wait for better conditions.

Sustained winds of about 40 mph (35 knots) and gusts of more than 50 mph (46 kn) were recorded in the harbour approaches in the last day and a half. Air temperatures dropped form the -7C to -14C range at the same time.  Water temperature remains at 0C. Seas ranged in the 2.9m  (9.5 ft ) range.