There seems to be some sort of attraction between ships named Michigan and the port of Halifax. As per my post on February 9 a ship named Lake Michigan called here in 1989. Read more at: http://shipfax.blogspot.com/2019/02/michigan.html

In 1990 another ship, also called Lake Michigan, with the same owners as the previous one also called here. Although owned by a one ship company called Seaweed Maritime Co Ltd, of Limassol Cyprus, it carried the same funnel marking with a large blue/green "A".

On February 4, 1990 the second Lake Michigan ship lost power 10 miles off the Cuban coast, on a trip from Caletta Patillos, Chile to Baltimore. Remarkably, Cuba permitted the US Coast Guard to send a plane into Cuban air space to assist the ship. It was then towed into Bahia de Nipe, February 7. Repairs must have been accomplished relatively quickly, since the ship  arrived in Halifax March 6. Initially it tied up at pier 22 where it loaded bagged flour.  It then moved on March 23 to pier 28 where it topped up with bulk  grain, finally sailing on March 29. I did not record a destinaiton, but based on the previous Lake Michigan's itinerary of 1989, Egypt would be likely. 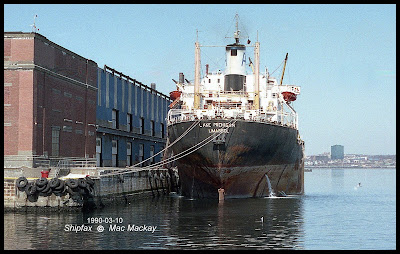 Tied up at pier 22, the ship loaded a part cargo of bagged flour using its own derricks.


Ordered as Unitramp for Danish owners at Tirrento e Riuniti, Ancona, Italy, it was delivered to Fratelli d'Amico as Mare Piceno in 1968. In 1981 it passed to the first in a series of Greek owners as Giovanna II, in 1983: Vanna, 1988: Capetan Manolis and finally in 1989 Lake Michigan. A bulk carrier of 15,720 gt, 27,898 dwt, it was fully fitted with no less than fourteen 8 ton derricks for working cargo. 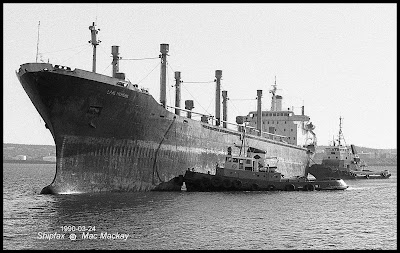 The tugs Point Vigour and Point Halifax moved the ship to pier 28 to load bulk grain on top of the bagged flour. The grain would stablize the bags and prevent then from shifting, but unloading would be particularly labour intensive.


It cannot have carried many more cargoes after leaving Halifax, because it arrived in Alang, India for scrap July 21, 1990. Twenty-two years was considered to be about the end of the line for a ship operating in marginal trades.