Not included in the previous article about reefers, is the one ray of sunshine for the reefer trade. Despite cautionary advice from nutritionists, orange and other fruit juices are still immensely popular. Partly because they have been marketed differently from carbonated sugar drinks, they still form part of the daily diet for North Americans and Europeans, despite their high free sugar content.
Since 25% or more of the world's supply of orange juice originates in Brazil, and the rest from other tropical countries (not forgetting Florida), the juice has to travel a long way before it reaches the consumer. This is where reefer ships come in.

It was long ago determined that shipping juice in concentrated bulk is more efficient than shipping it packaged for consumers - especially over long distances.  Savvy reefer owners devised a way of building special stainless tanks into reefer ships, that can be sterilized and refrigerated to maintain the integrity of the product until it reaches the US or Europe. There it is pumped ashore and goes to blending plants and packaging facilities, where the concentrated juice is made into orange juice, other orange flavoured soft drinks, or converted to compounds for other products such as marmalade. After packaging it is transported by truck or train to retailers.

However for the ocean leg, the juice reefers (mistakenly called juice tankers) can keep frozen concentrated orange juice (FCOJ), and other juices such as frozen concentrated pineapple juice (FCPJ) at -10C  or fresh juice not from concentrate (NFC) at -1C or whatever temperature is dictated, using the brine system that reefer ships carry. The tanks are also kept aseptic for NFC by nitrogen - pumped from shore and / or generated aboard ship. Oxidation must be prevented to ensure purity.

The major juice carriers of the world now operate more than two dozen ships that have juice tanks built into some holds, but can also carry reefer containers in other holds and /or deck.  Some juice can be carried by "bag-in-box" reefer containers or even in drums, but the latter are not recyclable or re-usable so are less popular.

Among the pioneers in juice "tankers" was the Dutch Seatrade Groningen, which operates from South and Central America to North America and Europe with conventional reefers. They converted one of those ships to carry juice in tanks in 1999. 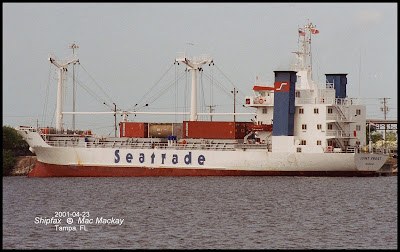 Although it does not look very different from many smaller type reefers, Joint Frost was a pioneer in juice transport.


Joint Frost operated for a joint venture between Seatrade and Tampa Juice Inc and brought juice from as near as Costa Rica to Florida for blending or forwarding. The ship was built in 1979 by Brattvaag Skips in Norway, and measured 2595 gt, 2854 dwt. It had a capacity of 1300 tonnes of FCOJ in tanks, and carried reefer containers on deck and in some holds.

Recently Seatrade had a new juice tank carrier built called Juice Express and Joint Frost may have been demoted - it hasn't reported a movement since December of 2018, when it was in Cuba.

Other companies have much more massive ships, which, needless to say have never been seen in Halifax. They are not tankers, but are reefer ships with some tanks fitted in the holds. Such companies as Atlanship, Aleuropa, and Citrosuco are investing in more ships as the juice trade is apparently thriving.

Reefer ships used to be frequent callers in Halifax for two reasons. The first was delivering fresh fruit, but almost as important was picking up boxboard, manufactured in Canadian paper mills. The ships would divert on their way back from Europe to South America to pick up the cargo for use to package bananas, oranges and grapefruit. Nowadays the box board is more efficiently carried by scheduled container ships.

Dole Europa, arriving in Portsmouth UK in the "bananas for Britain" trade, is a modern reefer/ container ship It can carry non-refrigerated containers too..

So maybe there is still hope for those sleek white ships, unless people swear off OJ with breakfast.