While the rest of the harbour was playing catch up after stormy weather took the pilot boat off station over night and this morning, work continued full bore on the Fundy Rose refit.

The Digby/Saint John ferry arrived at  Pier 9C in Halifax January 29 for a refit expected to take almost four weeks. The ship is expected back in service on or about February 25.  On Thursday the ship was turned at the dock, allowing work on the ship's port side to proceed from shore. There is new framing going in around the passenger ramp doors, just aft of the funnel, and on the main passenger deck.

However the big job appears to be reconditioning the bow doors, which have been removed, and landed on the pier. They are under a temporary tarped structure for blasting and painting. 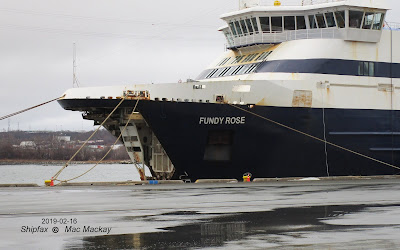 The former Greek ferry Blue Star Ithaki,  it went into service on the Bay of Fundy in 2015. It has since undergone a series of upgrades, but there appears to be much work left to be done. Last year it was in Halifax for refit from January 25 to April 24. There is a lot of unsightly surface rust on the superstructure. Typical of ships built in temperate climates, where chipping and painting can be done all year long, little care was taken in proper preparation for painting. They get seedy looking quite quickly when they arrive in our environment. The only solution is better surface prep by blasting down to bare metal, priming and recoating with durable paint - and in the summer time.

Fundy Rose was built in 2000 by Daewoo Heavy Industries in Okpo, South Korea as Superstar Ithaki, but was delivered as Blue Star Ithaki. It was temporarily renamed Canada 2014 for its delivery trip from Greece to Canada in November 2014. After its first refit in Halifax, it was registered as Fundy Rose April 8, 2015. Because it is owned by the Crown by way of the Minister of Transport, it is registered in Ottawa. Bay Ferries Ltd is the operator and responsible for maintenance.