Fireboats have been a controversial topic in Halifax for at least eighty years if not more.  The debates have erupted periodically over those years, but there has been a lull for a while. I guess it is inevitable that the topic has arisen again, in view of recent shipboard fires - one of which was in Halifax in January.

To go well back in time, the Royal Canadian Navy has provided fireboat services, primarily for HMC Dockyard and other DND properties, peaking during World War II when the navy was a full strength with scores of ships in Halifax. They were never reluctant to fight fires on civilian ships and waterfront properties when called out. They have also maintained a specialized firefighting force, trained to deal with shipboard fires. Also one of the navy's two firefighting schools is located near Herring Cove at the mouth of Halifax Harbour. The school trains navy members about firefighting aboard ships, so that each ship can be capable of dealing with a fire on board when it is away from port.

The January 28 fire on the tanker Kivalliq W. while docked at Imperial Oil was extinguished by military firefighters, trained to fight shipboard fires.

Until recently the navy has maintained a full time fireboat in Halifax, however it was retired in 2014. However the three large dockyard tugs are fitted with fire monitors. Dockyard firefighters will board the tug as needed to respond to fires. The military also maintains a fire department and firetrucks within HMC Dockyard and it will respond to fires in other military installations including Windsor Park. There is also an aviation firefighting capability at Shearwater.

The controversy always seems to centre around the City of Halifax, and its sense of responsibility for fighting fires on the waterfront.

During World War II, the City of Halifax and the National Harbours Board, had a disagreement on the topic and it ended up that for a time, both maintained fireboats, but there was a great deal of controversy about who was to pay and what were the areas of responsibility. As it turned out there were a number of shipboard fires in the port, but also a number of shoreside fires in the City itself, and  both fireboats responded.

The City of Halifax acquired the former City of Toronto fireboat Rouille in 1941. The 100 foot long coal burner was built in 1929, and had, for the time, a prodigious pumping power of 450 gpm using 3 "fire guns" (monitors) and had 16 hose connections on deck. In its short time in Halifax it did respond to several notable fires, some on ships and some on land.

In 1943 the National Harbours Board assigned the fire tug James Battle to Halifax,. It had been built in 1900 for the City of Detroit and was purchased in 1941 by Quebec tug operators and chartered by the NHB. It was also quite powerful and fully equipped.

In August 1945 the NHB ended the charter of the James Battle and returned it its owners and took over the Rouille.  The City had used 15 crew members with 13 fire crew, and it was spending $1,000 month to run it, exclusive of crew costs, which amounted to almost $70,000 a year.

The NHB found the costs onerous too, and in April 1946 returned the tug to its owners, the J.P.Porter Company. However both boats were in service in August 1945 and fought the Bedford Magazine, averting a potential second Halifax explosion.

Meanwhile the navy had been making do with a series of rebuilt tugs as fire boats, until wartime shipbuilding had been wound down. It took delivery of FT-1 Fox (YTM-556)  in 1946. It was an enhanced version of the steel TANAC standard tug, with enlarged hull to accommodate pumps and an array of fire monitors and hose connections. With its presence in the harbour, and the well  trained naval firefighters, both the City and the NHB no longer felt an obligation to provide fireboats. 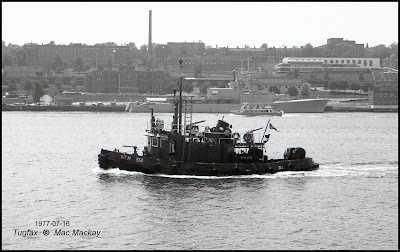 
Fox served until the delivery of the Firebird in 1978. It was fortunately, rarely called on the respond to serious fires, but did attend to other duties such as security rounds and rescue/recovery calls. It was manned and operational 24/7 until early 2014. Its station, immediately under the Macdonald bridge, meant that it was usually first on scene when there was a suicide. 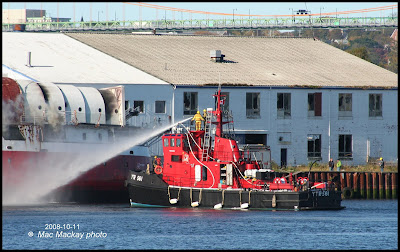 Firebird was called in to extinguish a fire aboard the former CCGS Tupper at Dartmouth Marine Slips in 2008.

By the time Firebird was retired most of the civilian harbour tugs had also been fitted with firefighting equipment. This was at the behest of oil terminals and refineries world wide, and Halifax at any time always has at least two if not three or more civilian tugs with substantial firefighting capability. Under the direction of navy firefighters, and using the navy tugs, there is now more fire protection  / fire fighting capability in Halifax than ever before.

In 2008 the Halifax Fire and Emergency Services contracted for construction of a small (25 foot long) outboard +inboard fireboat. Unfortunately the builders were not quite up to the job and it capsized and sank while doing trials in Halifax, and was never accepted by the department. The five Halifax firefighters on board at the time were lucky to have survived.

It now transpires that the current fire chief feels the need for a more substantial boat than the current Zodiac type trailerable boats. I am sure he can make a good case for it, presumably to fill some sort of gap not filled by the present situation. It is bound to be controversial however, since its usefulness would be quite limited.