It is the time of year when we see ice class tankers more and more. Not that they require this capability for Halifax, but they are working the region. A case in point, so to speak, is Ice Point that arrived this morning for Nova Scotia Power's Tuft's Cove generating station on the Narrows.

The ship is one of five ice class 1A tankers in the PB Tankers fleet. Built in 2007 by STX Shipbuilding, Jinhae, South Korea, it is mostly indistinguishable from other tankers of its type. At 30,119 gt, 50,922 dwt it is slightly larger than the usual maximum of 50,000 dwt. 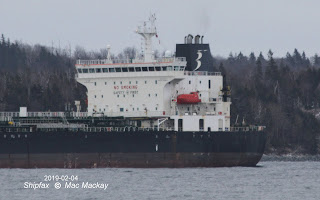 However its full width bridge is not typical, and usually signifies a ship built for winter conditions. I imagine the crew appreciates the air conditioned bridge in tropical climes too.

The ship's owner is PB Tankers SpA of Palermo, Italy, which is part of the Pietro Barbaro Group (hence the stylized "B" on the funnel.) A sister tanker Iron Point is currently docked at the Jean-Gaulin refinery in Lévis (Quebec City) where its ice classification puts it in very good stead. [see yesterday's Tugfax post].

The Nova Scotia Power generating plant was built in stages in the 1960s and 1970s, and in 2000 was converted to burn oil or natural gas. Since then new natural gas turbine generators have been added and the  plant has been burning almost exclusively gas since then.

However the plant still maintains oil storage on site, and last August 2 a spill occurred, that was blamed on a corroded pipe. A large cleanup effort ensued that involved replacing 150 linear meters of shoreline rip rap boulders. The work was declared completed December 5.

The Eastern Canada Response Corp, the oil cleanup organization owned by several oil companies, was called in at the outset and organized the work.  ECRC's oil cleanup barge , John P. Oxley, which had been stationed in Halifax since it was built in 2001, was not available. It was towed out to Sydney, NS June 9, 2018 and has never returned. 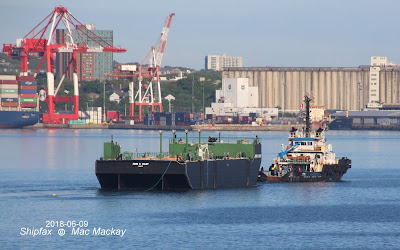 The barge John P. Oxley leaves Halifax in tow of the Lois M.

Does the arrival of more oil at Tuft's Cove signal a return to oil burning at the plant? With the shutdown of Nova Scotia's offshore gas, perhaps Bunker C is more attractive. However the notable improvement in air quality around the plant has been a major benefit of the switch to gas. Soot from the three 500 foot tall smokestacks has all but disappeared in the Tuft's Cove area.

The only disruption to the natural environment seems to have been the oil spill. The resident seals and birds in the area were reportedly scared away during the cleanup by noise generators.