Ice Point in ballast heading for the St.Lawrence River.

The ship is headed for Lévis, QC. By coincidence its 2008 built sister ship Iron Point sailed from Lévis this morning, headed for Boston. The two ships will pass somewhere in the Gulf of St.Lawrence.

One feature of the Tuft's Cove terminal is that ships secure to mooring buoys and use line boats to take the head and stern lines to the buoys. (This is not unique in Halifax - the docks at Autoport and Irving Oil Woodside also require line boats.)

Boats from Connors Diving Services Ltd do the line boat duties for Nova Scotia Power, and their veteran work boat tender Divecom III does the honours, along with a smaller outboard. It also deploys the oil boom around the ship during unloading. 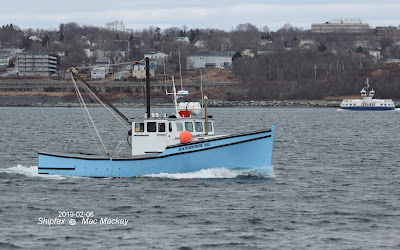 Divecom III heads back to base at the Armdale Yacht Club on the Northwest Arm.

Divecom III was built of wood in 1984 by Roy M. Doucette at Cape St.Mary, NS. That company has since switched to fibreglass and moved to nearby Yarmouth, NS. Present day boats are much larger and beamier - this one is a traditional style.

Connors Diving has other watercraft and by coincidence one of them passed my vantage point a few minutes later. Eastcom is a much newer vessel, dating from 2010 when it was constructed, of fibreglass, by Millennium Marine Inc of Escuminac, NB. 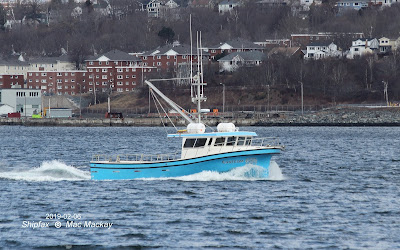 Eastcom returns to its base at the Royal Nova Scotia Yacht Squadron.

It offered an opportunity to compare the favoured hull shapes from southwestern Nova Scotia  to those on the Northumberland Strait.

Eastcom is in almost daily use in the harbour with various diving operations and rescue training. It also heads out to rendez-vous with ships off Halifax with charts, part and sometimes ice advisors.

Also sailing at noon time was a CLI Pride after a very short stay in Halifax. The ship only arrived this morning at Fairview Cove.

This is the ship's second call in Halifax in a month. Its last was January 7 [ see Shipfax post for more details ] when it arrived from Rotterdam. It sailed the same day, directly back to Rotterdam and returned to Halifax. It makes one wonder why they didn't use a larger ship and save a trip!

On departure the ship gave Liverpool, UK as its next port.