Up very close and personal

The rush to have new cars on the lots by spring is bringing many car carriers to Halifax these days. No sooner was Primrose Ace (see yesterday's post) underway from Autoport late this afternoon than the next ship was maneuvering in the harbour to take its place.

Glorious Leader took a  long swing around to the west and north of George's Island to give the outbound ship lots of room. This gave opportunity for a fairly close up look at the ship, despite the long shadows from buildings on the Halifax shore. 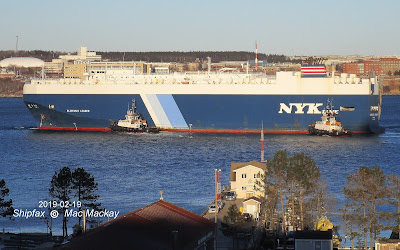 The ship began its turn just off the Svitzer Canada / pilot dock.

Glorious Leader has made several trips to Halifax, the most recent just a month ago. It is owned by Ray Car Carriers, but is on charter to NYK Line, the largest autocarrier fleet in the world, now numbering 120 ships - some owned, some chartered.

I have always been curious about the name, since it was a term of sarcastic disrespect in my experience, and nowadays seems to apply specifically to the ruler of North Korea. Why the name was chosen for this ship is a mystery.