Two tankers arrived an hour apart this afternoon, both from the St.Lawrence River.
First in was Irving Oil's Acadian. Built in 2005 by Hyundai Mipo, the 23,356 gt, 37,525 dwt ship is owned by TB Tankship I Inc and managed by Iver Ships BV on a long term charter to Irving Oil. 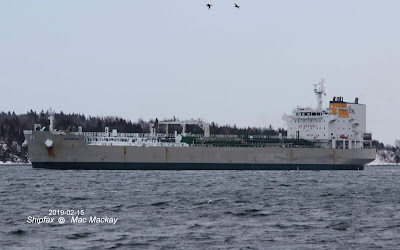 Acadian carries a coat of frozen spray on deck from bow to nearly midships.
The ship's last port was Montreal where it loaded at Norcan Terminal. At last report Irving Oil was a part owner of the facility along with La Co-op Fédérée and MacEwan Petroleum Inc. The terminal has pipeline access and can store 1.3mn bbl of gasoline and distillate.


The second arrival is primarily a chemical tanker, built in 2008 by Yildirim, Tuzla, Turkey. Originally named Selay-S. it traded under the Turkish fag until 2017. Current owners Lasse Shipping CV, are Netherlands based, as are managers South Ends Tanker Management BV. They renamed the ship in 2017. 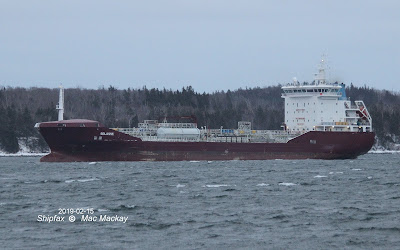 Although traveling essentially the same route, Selasse appears to have much less frozen spray than Acadian. Its covered forepeak may be responsible for some of that. Note however that the vessel's port anchor is lowered away and ready for use.

More tankers are due. The Isolde has been anchored off Halifax since yesterday awaiting its turn at Irving Oil. Algonorth, on the Lévis shuttle, sailed from Imperial Oil dock 4 this morning. (Berth 5 - the former crude oil pier has been decommissioned, and berth 3 is no longer used. It was once primarily the export berth.) and the Alpine Hibiscus is due tomorrow from Baton Rouge for Imperial.