Some clearing later in the afternoon allowed for a brief outing to catch a traffic jam of one departing and two arriving ships. It was deftly handled and safe passages were had by all, although I did think that perhaps one ship was a little overly eager.

The departing ship was another queen (see earlier post) but this was a more prosaic one. Viking Queen is a Singapore flag autocarrier from the Gram Car Carriers fleet. Built in 2007 by the Uljanik shipyard in Pula, Croatia as Hoegh Delhi it was renamed in 2017.

The 55,775 gt, 16,840 dwt ship has a capacity of 7000 cars (CEUs) and as the largest and least maneuverable of the three ships, it claimed the main channel as its seaward course en route for Davisville, Rhode Island.

The first of the incoming vessels, HMCS Fredericton took the western, or deepwater channel to give Viking Queen some room.

Fredericton emerged from the latest repair session at Halifax Shipyard in November 2018 and for the past few weeks has been seen in Bedford Basin, at the static sound range and loitering offshore. Today's outing may or may not have included a commemoration of the the D-Day landings in Normandy 75 years ago. I could find no reference, to what it was doing, in particular.

As the departure point for thousands of Canadian troops sent to Europe during World War II, the port of Halifax was closer to the war than any other Canadian city. That was recognized today in a special ceremony attended by among others, the Governor General. Although it had to be moved indoors due to the weather - that was nothing new for those who know Halifax! - it was well reported by all news organizations. Attendees included some of the sadly diminishing ranks of those who served in World War II.

Third vessel in the mix was the supplier Trinity Sea returning from the Sable Island area on its regular supply run. 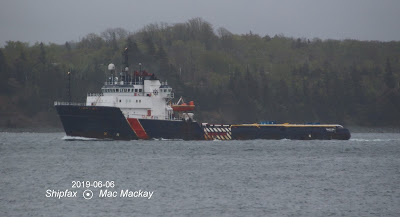 As the smallest of the ships it was able to hug the eastern side of the main channel and gave the outbound 'Queen a port to port passing.

Here is what it looked like as Fredericton emerged from the western channel, Viking Queen carried on and Trinity Sea kept to the eastern side.