The berth known as the Tall Ships Quay just north of pier 20 and once the Nova Scotia Light and Power's coal dock, has become a favourite spot for super yachts. This time it is the 1550 gt Sycara V. 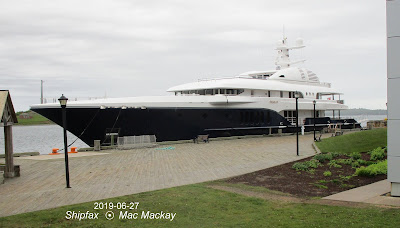 The 225 footer was built by Nobiskrug in 2010, but in 2017 it had an extensive refit. Also as usual for yachts of this type it is listed for sale for a mere 59 million Euros, but in case you don't want to make that commitment you can charter for $485,000 a week (plus costs of course.)
The vessel can do 17 knots, but for the economy minded, cruising at 10 knots gives a range of 7,000 nautical miles. 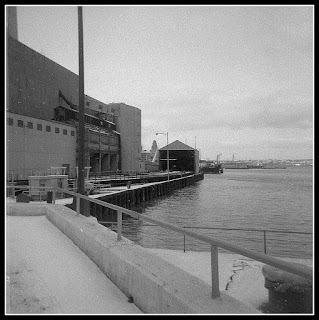 Seen from pier 20 in 1968 the dock had ceased to bring in coal and the power plant was converted to burn oil, but the coal bunkers were still there as was the car dumping shed to unload rail cars.
Emera, parent company of what is now the Nova Scotia Power Corp gave the old building a major overhaul and it is now their corporate headquarters.