Perhaps not wishing to look a gift horse in the mouth Seaspan did not mention the fine print involved in the recent announcement that the federal government was awarding them the work to replace the Canadian Coast Guard's fleet of icebreakers and buoy tenders.

That eighteen or nineteen ship contract has a major string attached, and that is the government has withdrawn construction of the polar icebreaker from Seaspan and will be awarding it to a third shipyard yet to be designated.

The major icebreaker has been a key part of the non-combat work at Seaspan, but had been postponed in favour of the two supply ships for the RCN.

There are some good reasons for moving this contract and some very peculiar justifications presented by observers.

First the explanations:
It is logical that a series of smaller ships will be better suited to Seaspan's abilities and will certainly make sense for one yard to build all the ships in a series. (That logic apparently doesn't work for refits of naval ships, but we will let that one pass.)

It is almost laughable to say that the third shipyard is yet to be designated. Since there are really only three shipyards of any size in Canada, and Halifax will not be getting the polar icebreaker, that leaves Davie. Why not say so?

Justifications:
Aside from the logic of giving the contract to a capable shipyard it is also a politically sensitive time for the current Liberal government. They need Quebec votes, and this will certainly help.

Then there is the repeated opinion that Davie is an icebreaker specialist and that this is their kind of work. This is a ludicrous statement since the last icebreaker of any size they built was CCGS Griffon in 1970 and of a heavier size the CCGS J.E.Bernier in 1967. Certainly they have built numerous ice class ships, including some very capable ferries and some tankers, but they were not icebreakers. In fact the last heavy icebreaker they built was the CCGS John A. Macdonald in 1960. To think that any of that expertise still resides in the shipyard management or its workers strains credulity.

They have certainly  been maintaining the CCGS Louis S. St-Laurent in recent years and are refitting the three ex Swedish icebreakers, but that is not new construction.

I am all in favour of Davie building the polar icebreaker. It will mean that the ship may be completed in a reasonable amount of time. Certainly they have the work force to do it and an open enough order book that it should not be delayed, thus ending the series of multi-million refits to keep CCGS Louis S. St-Laurent running. 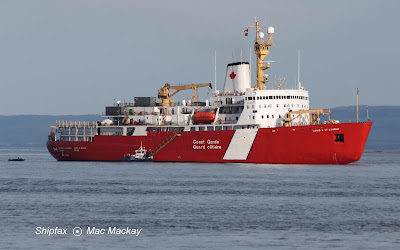 I am waiting for the other shoe to drop - in fact both other shoes.

Shoe #1
Canada actually needs two polar icebreakers, not just one. When will the government decide to award the second one (publicly)? Maybe not before the October election. CCGS Terry Fox is a capable vessel and was a great bargain. However its ability to carry scientists and conduct other arctic work is limited.


Shoe#2
The second shoe is the name. The current polar icebreaker project has carried the name CCGS John G. Diefenbaker since it was announced by the Conservative prime minister in 2008. I cannot see a Liberal government delivering a ship with that name. Supposing the Liberals get in again in October, I expect to see the name change. And it will not be Lester B. Pearson (which incidentally has been my nomination, even though I would prefer his nickname of Mike to be used.)

If two icebreakers are built then there is a logical solution - but perhaps not as politically astute. However de-politicizing the naming of icebreakers is a faint hope.